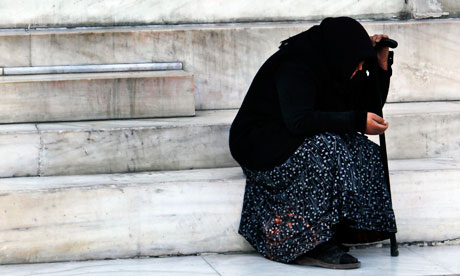 In recent weeks, Theodoros Mavridis has bought fresh eggs, tsipourou (the local brandy: beware), fruit, olives, olive oil, jam, and soap. He has also had some legal advice, and enjoyed the services of an accountant to help fill in his tax return.

None of it has cost him a euro, because he had previously done a spot of electrical work – repairing a TV, sorting out a dodgy light – for some of the 800-odd members of a fast-growing exchange network in the port town of Volos, midway between Athens and Thessaloniki.

In return for his expert labour, Mavridis received a number of Local Alternative Units (known as tems in Greek) in his online network account. In return for the eggs, olive oil, tax advice and the rest, he transferred tems into other people’s accounts.

“It’s an easier, more direct way of exchanging goods and services,” said Bernhardt Koppold, a German-born homeopathist and acupuncturist in Volos who is an active member of the network. “It’s also a way of showing practical solidarity – of building relationships.”

He had just treated Maria McCarthy, an English teacher who has lived and worked in the town for 20 years. The consultation was her first tem transaction, and she used one of the vouchers available for people who haven’t yet, or can’t, set up an online account.

“I already exchange directly with a couple of families, mainly English teaching for babysitting, and this is a great way to extend that,” said McCarthy. “This is still young, but it’s growing very quickly. Plainly, the more you use it the more useful to you it gets.”

Tems has been up and running for barely 18 months, said Maria Choupis, one of its founder members. Prompted by ever more swingeing salary cuts and tax increases, she reckons there are now around 15 such networks active around Greece, and more planned. “They are as much social structures as economic ones,” she said. “They foster intimacy and mutual support.”

The network is currently busy transforming a disused building owned by Volos university into a permanent exchange and barter space. It will host a daily market from next month at which members can meet and exchange without using cash. Several highly successful open-air markets were held throughout last summer, Choupis said, until the weather got too cold.

“They’re quite joyous occasions,” she said. “It’s very liberating, not using money.” At one market, she said, she approached a woman who had come along with three large trays of homemade cakes and was selling them for a unit a cake. “I asked her: ‘Do you think that’s enough? After all, you had the cost of the ingredients, the electricity to cook …’

“She replied: ‘Wait until the market is over’, and at the end she had three different kinds of fruit, two one-litre bottles of olive oil, soaps, beans, a dozen eggs and a whole lot of yoghurt. ‘If I had bought all this at the supermarket,’ she said, ‘it would have cost me a great deal more than what it cost to make these cakes.'”

What rules the system has are designed to ensure the tems continue “to circulate, and work hard as a currency”, said Christos Pappionannou, a mechanical engineer who runs the network’s website using open-source software.

No one may hold more than 1,200 tems in the account “so people don’t start hoarding; once you reach the top limit you have to start using them.”

And no one may owe more than 300, so people “can’t get into debt, and have to start offering something”.

Businesses that are part of the network are allowed to do transactions partly in tems, and partly in euros; most offer a 50/50 part-exchange.

“We recognise that they have their fixed costs, they have to pay a rent and bills in euros,” said Pappionannou. “You could say that their ‘profit’ might be taken in Tems, to be reinvested in the network.”

Choupis said she thought the network would have grown even faster that it has if people were not so “frozen, in a state of fear. It’s like they’ve been hit over the head with a brick; they’re dizzy. And they’re cautious; they’re still thinking: ‘I need euros, how am I going to pay my bills?’ But as soon as people see how much they can do without money, they’re convinced.”

The Greek parliament recently passed a law encouraging “alternative forms of entrepreneurship and local development”, including exchange networks such as Volos’s, giving them official non-profit status for tax purposes.

Choupis said there was a new mood abroad in Greece, a determination to “move beyond anger to creativity”.